Project of the Month: RE Dinneen Architects designs repositioning of 33 New York Ave. for life sciences and technology tenants 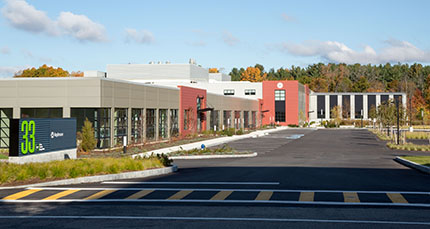 Framingham, MA Built in 1970 as the headquarters for a local newspaper that eventually became The Middlesex News, the single story industrial building functioned as a corporate office and printing press  throughout its 40+ years of existence. Originally consisting of a 90,000 s/f footprint, the building had been largely underutilized as the newspaper printing business declined in recent years. In the meantime, the surrounding area has seen a renaissance as both new construction and building renovations are added in response to the current needs of a booming life-sciences industry. Major innovation players such as Sanofi, Genzyme, and Bose all have considerable presence in the immediate vicinity.  The site’s location at the juncture of Rte. 9 and the Mass Turnpike make it a desirable destination for companies in search of R&D and manufacturing space. 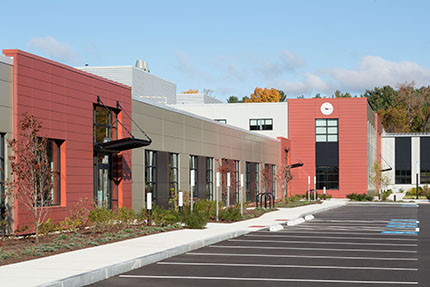 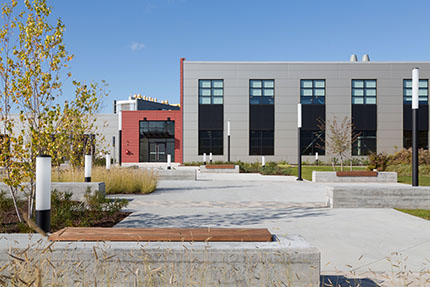 The building was redesigned to support four separate tenants, with each tenant having its own control area for chemical and waste storage. This layout also maximized access to existing high-bay space, allowing all tenants to combine office, research and manufacturing needs under one roof. Each tenant has its own exterior entrance, with new glass canopies punctuating the access areas. The existing façade was completely removed and redesigned to maximize natural light and energy efficiency. By using  materials with high R-value, the building’s energy consumption was reduced considerably. 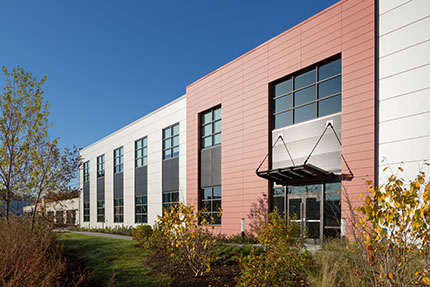 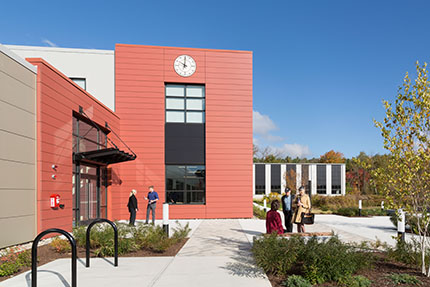 The exterior design aesthetic is intended to be high tech in the use of materials, yet respectful to the history of the building’s typology and the industrial nature of the surroundings. Early 20th century industrial buildings from the Bauhaus and Modernist periods were a source of inspiration for exterior treatment, inclusive of the analog clock gracing the main entrance. RE Dinneen Architects added 17,000 s/f to increase the rentable area, with a large portion being added to the street side to increase the building’s visibility.