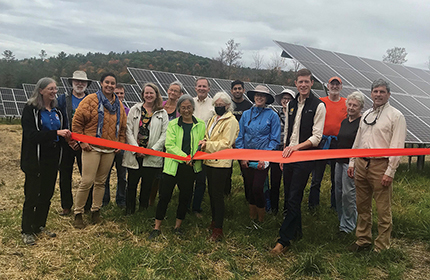 According to the EPA, the solar roughly 8-acre solar farm will offset 3.2 million pounds of CO2 emissions per year, equivalent to the carbon sequestration of 1,816 acres of American forests and over 320 passenger cars driven for one year.

The array was installed by ReVision Energy. It was financed by ReVision’s mission-driven impact investors through a Power Purchase Agreement (PPA), which will enable to town to procure clean electricity at below-market rates for five years and then acquire the solar arrays as a long-term clean energy endowment.

“In battling the impacts of climate change, communities need to be in a leadership role” said Julia Griffin, Hanover’s town manager.

“One very important component of that is solarizing the heck out of every possible rooftop, and to pursue at the Town level large ground-mounted solar arrays.” 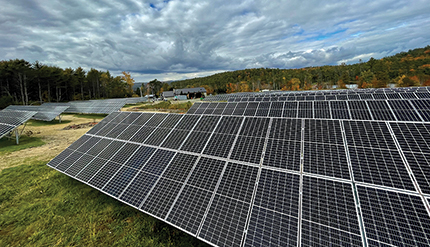 Hanover has long been a state leader in sustainability, as evidenced not just by the latest solar farm but the half-dozen other rooftop solar arrays installed with ReVision Energy on Town buildings. In 2014, Hanover was named the Environmental Protection Agency’s first Green Power Community in New Hampshire, and in 2017, Hanover became the first “Ready for 100” town in New Hampshire. The program is a Sierra Club initiative that encourages leaders across the country to commit to 100% renewable energy by the year 2050, but Hanover went further and set the community-wide goal of transitioning to 100% renewable electricity by 2030 and transitioning heating and transportation to run on clean, renewable sources of energy by 2050. The town is also currently running Solarize Hanover, with a goal to double the number of solar-powered homes in Hanover by the end of the year.

“All across New Hampshire, cities and towns are stepping forward to combat the climate crisis with clean energy projects, energy efficiency, and beneficial electrification,” said Dan Weeks, an employee-owner and vice president at ReVision Energy. “Although the state still has a long way to go, with less than one percent of electricity coming from solar, we are inspired by how Hanover’s leadership of the clean energy transition and honored to partner with them.”