The Chiofaro Co. unveils “The Pinnacle at Central Wharf”

Boston, MA  The Chiofaro Company filed a Project Notification Form (PNF) with the Boston Planning and Development Agency (BPDA) for the redevelopment of the Harbor Garage, unveiling long-anticipated design proposals for the creation of a waterfront landmark, ‘The Pinnacle at Central Wharf’.  The project proposes to replace the existing block-long, 7-story parking garage with a mixed-use campus.

The filing represents the culmination of 10+ years of planning and input from stakeholders, as well as the commencement of the city’s Article 80 development review process, which will analyze the details of the project’s design, engineering, environmental impacts, and public benefits.

‘The Pinnacle at Central Wharf’ combines over 28,000 s/f of new open space (representing 50% of the site) and improvements to the adjacent Harborwalk, with a single 600 foot tower element totaling 865,000 s/f and consisting of:

• A 538,000 s/f, office component, customizable for use by the full range of the city’s diverse tenant base; and

• 42,000 s/f of publicly accessible amenity space, including retail, restaurant and other uses to activate the streetscape, the surrounding open space and the entire neighborhood.

The word ‘pinnacle’ is defined as ‘the highest point of development or achievement,’ and The Pinnacle at Central Wharf embraces this definition for its inspiration and its aspiration.  The project aims to celebrate and amplify the neighborhood’s existing cultural, educational and recreational assets and will serve as a catalyst for the broader transformation of the Downtown Waterfront into a global model, all the while underscoring the city’s leadership in sustainability and resiliency.

“The Pinnacle at Central Wharf is a project driven by a desire to elevate Boston to the short list of truly extraordinary global waterfronts,” said Don Chiofaro, founder and president of The Chiofaro Co. “In order to accomplish this goal, we need to deliver a project that promotes access and activity along our Harbor, honors its special location with exceptional design, and recognizes and confronts the challenges of climate change.” 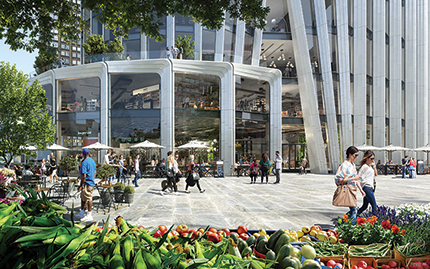 Public Access & Activity
As noted in the state-approved Downtown Waterfront Municipal Harbor Plan, ‘this is where Boston touches the water.’  Accordingly, the Pinnacle’s vast new open space has been designed and will be programmed to function as a destination in its own right, but its ultimate integration into enhanced adjacent open spaces, including the Greenway and the New England Aquarium’s proposed Blueway, unlocks the potential for a singularly remarkable whole that is far more than the sum of its parts.  By combining residential and office components with significant new publicly accessible retail and amenity space, The Pinnacle at Central Wharf will support existing residents and visitors, attract new ones, and serve as a substantial economic engine at the region’s commercial core.   The site is located at a hub of activity where a variety of existing assets converge, bringing a diverse group of tourists, locals, and people of all ages and backgrounds together, and, as such, it represents an opportunity to entertain, teach, inspire, and to make a first impression, shaping the image of the Boston Waterfront through iconic placemaking.

With 30% of the project’s open space concentrated to the north, a strong east-west connection between the Greenway and the Harbor is created, with a pedestrian-friendly plaza design that is accessible through steps and ramps at various locations.  The new public plaza along historic Central Wharf will function in complimentary fashion to the proposed Blueway, widening as it approaches the water and wrapping to the south and east, to form a seamless connection with an invigorated Harborwalk, reimagined as ‘The Porch’ at Boston’s ‘front door to the world.’  The building itself is designed to be welcoming and permeable, blending the exterior public realm with a range of interior amenities that will invite visitors both to pass through while accessing the area’s many cultural and recreational offerings, but also to linger in spaces that emphasize hospitality.

“We recognize that, no matter how grand and beautifully designed, public spaces must be active in order to be successful,” said Don Chiofaro, Jr., vice president of The Chiofaro Co.  “We look forward to engaging with Bostonians, through the Article 80 process and beyond, to explore how we can best animate the interior and exterior spaces at the new Central Wharf to appeal to the broadest cross-section of visitors.”

Excellence in Design
With its ‘paved cow paths’ and coastal roads and bridges that follow the flow of the water, Boston has never been about straight lines. The Pinnacle at Central Wharf will follow suit with a tower designed by Kohn Pederson Fox Associates (KPF), and Copley Wolff Design Group.

The site design for The Pinnacle at Central Wharf strives to build a unique civic space and destination in the heart of Boston, prioritizing pedestrians and allowing users to feel safe and free to be fully immersed in their surroundings.  The public realm will be responsive to its context, drawing influence from and making meaningful connections to the adjacent conditions, as the design vernacular evolves from a more linear, orthogonal expression at the points nearest the traditional Financial District to a more organic treatment along the proposed future Blueway and the harbor’s edge.  It will offer a rich array of experiences to its many users, guiding them through a variety of “outdoor rooms” in a comfortable, efficient, and accessible way.  Integrating climate resilient and sustainable features throughout, the design for the grounds contemplates a variety of wayfinding elements, flexible seating, an outdoor learning environment, waterfront overlooks and a living shoreline.

The unique tower form emerges dramatically from the ground plane and adopts a stepped language, with the mass reducing through a series of setbacks as the building ascends.  In addition to reducing shadow fall, these setbacks break down the scale of the tower, improve wind mitigation, provide outdoor spaces to building occupants and visitors, and open view corridors for neighboring residences.  Designed to present a distinct and powerful image on the skyline while being respectful of the existing context, the tower shape reflects the program within, beginning with the public spaces at the ground level.  The rounding of the overall form of the tower into a clover-like plan further reduces shadow impacts, while easing pedestrian flow around the building’s base by creating smooth circulation paths and opening view corridors to the water.  Beyond aesthetic considerations, the folded language of the façade acts to mitigate wind and reduces any potential impacts of solar glare by scattering and diffusing light reflections, rather than allowing them to focus on one point.  Grand gestures are created at the entry points in the podium for the office lobby, residential lobby, retail, and primary parking garage ramp, as well as at alongside the terrace facing the harbor.  At these moments, the vertical piers peel apart like a curtain to reveal a special façade expression, and serve as markers, with the tallest and largest opening at the office lobby facing the Greenway.

Climate Resilience and Sustainability
In recognition of the new realities and challenges of climate change, The Pinnacle at Central Wharf will be the first Downtown Waterfront project to implement the city’s newest climate-conscious development mandates, including by taking the extraordinary step of elevating the entirety of the project site (and the adjacent portion of the Harborwalk) by approximately four feet, thereby leading the way toward the creation of a district-wide solution to the dangers of sea level rise.  In addition to providing protection to the project itself, the raised site will form the first link in a broader elevated public space network that will protect the whole of Downtown Boston while contributing to, rather than detracting from, enjoyment of the harbor.   In tandem with the project’s unprecedented $10 million offset contribution toward the planning and development of the Aquarium’s resilient Blueway vision, the elevation of The Pinnacle at Central Wharf will be a catalyst for the defense of billions of dollars in property and infrastructure.

While raising the site is the most prominent example of resiliency measures,optimum building performance and environmental responsibility are fundamental components of the entirety of the project.  Targeted to be certifiable at a minimum level of LEED Gold, the project will incorporate a range of greenhouse gas reduction measures, embrace city goals for carbon reduction, incorporate electric-ready systems and include redundant infrastructure to stay up and running -- and serving the community -- even during storm or flooding events.  The tower will be designed with an eye toward ‘passive survivability,’ which will allow the building to be occupied during power loss and achieve energy savings during normal operations, and the landscape architecture will incorporate green infrastructure elements, such as shade trees and planting areas, which will provide ecosystem services and mitigate the effects of extreme heat events and intense rainstorms.

This week's columnist:
Is working from home working for you? - by Stanley Hurwitz