Quonset Business Park is the leading engine of economic growth and job creation in Rhode Island. The continued success of Quonset’s over 200 diverse companies is a testament to our commitment to providing our companies with a foundation for success. One example is J. Goodison Co., a full-service marine and industrial maintenance company that has seen tremendous growth in recent years.

Our team’s focus at the Quonset Development Corp. (QDC) is to create an environment for our many companies to grow in Rhode Island, and bring additional jobs and investment to the park. J. Goodison Co. is a great example of that goal coming to fruition.

J. Goodison was founded in 1999, as a “road company,” completing all of their ship maintenance work by renting space at other shipyards throughout New England. The increased demand for their services, and the lack of machine capabilities in the area brought them early success - even without their own shipyard.

Before J. Goodison could move in, however, the QDC needed to repair the bulkhead at their current location after it was severely damaged by Superstorm Sandy in 2012. To pay for this, the QDC was awarded a $6 million federal grant from the U.S. Economic Development Administration, which the QDC matched. The new Goodison shipyard officially opened at the location in 2016 and the business has flourished ever since.

Goodison’s core business model has contributed to their rapid growth at the business park. Their shipyard is centrally located between Maine and New York, with the capacity to pull any type of boat from the water for maintenance. From barges, tug boats, fishing vessels, sailing ships and everything in between, J. Goodison has established themselves as a leader amongst the Northeast’s ship repair service companies. They are equipped with a Marine Travelift mobile boat hoist with a lifting capacity of 820 metric tons, making their project capacity unmatched in the industry.

Thanks in part to the efforts of U.S. senator Jack Reed, the U.S. Department of Transportation’s Maritime Division (MARAD) granted J. Goodison $635,453 in federal funding in 2017 through the Small Shipyard Grant Program. With this grant, they were able to purchase a wastewater collection and treatment system for the shipyard at Quonset. The new system now treats over 20,000 gallons of water monthly, and has helped the shipyard operate more efficiently. 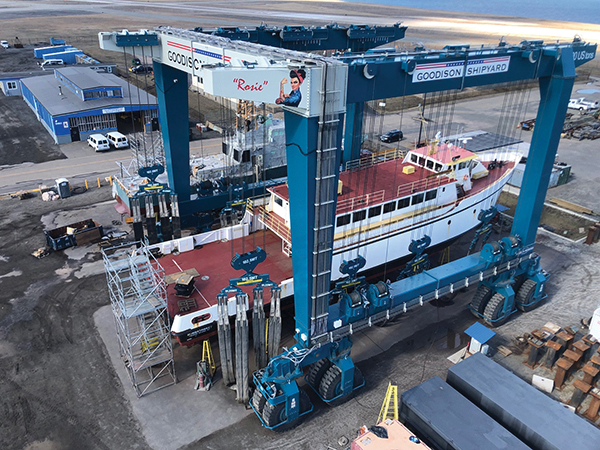 Construction of the new water treatment plant opened up new space in the shipyard. Since then, their project capacity and job growth has increased sharply, as they can now handle as many as 13 projects simultaneously – previously they could only manage six at a time. J. Goodison has increased employment at the shipyard from around 60 employees in 2017 to over 100 today. In total, J. Goodison completed over 120 vessel repair projects in 2018, a company record.

“Quonset Business Park has been instrumental as we have grown and expanded within the Park,” said company CEO Jack Goodison. “They have been very helpful in our growth, specifically as it relates to the development and opening of our shipyard, and we look forward to Quonset being our home forever.”

Looking toward the future, J. Goodison has applied for a second MARAD grant in order to purchase additional equipment. The company considers it to be more cost effective to buy new equipment than to rent and constantly refurbish old equipment as they currently do, said Goodison. This could position them to increase project capacity even further.

The continued growth of J. Goodison is a great achievement and a model for the essential role of infrastructure in Quonset and Rhode Island. The QDC will continue to be a reliable partner in the future growth of J. Goodison and all of the other 200 plus companies that call the business park home.