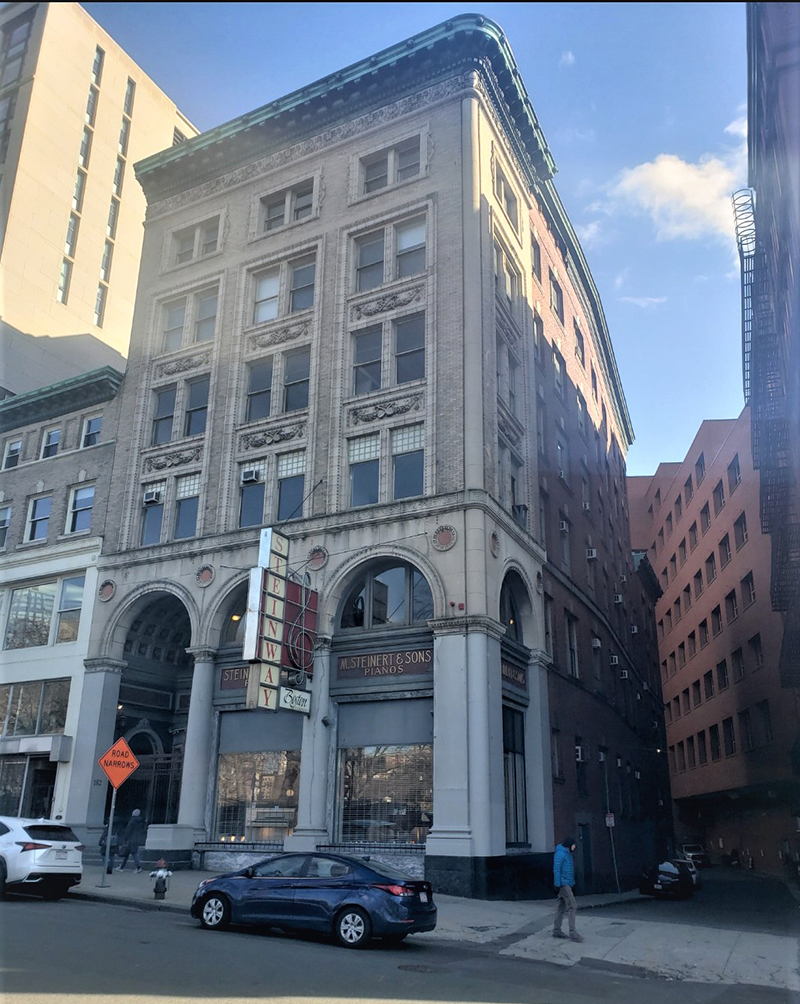 Boston, MA William Thibeault, owner of Thibeault Development continues to be active in the downtown market, having just closed on the Steinert building. The 38,000 s/f building located at the corner of 162 Boylston St, overlooks the Boston Common with views of the public gardens.

The building has long been used for the sale of Steinway Pianos, since it was built in 1896 by the M Stienert and Sons Piano Company. The building does have a unique feature, as it also houses a long-forgotten concert hall four levels below ground, known as Steinert Concert Hall or Little Gem.

Thibeault said he was amazed by the building and concert hall when he first visited. “It was like stepping back in time. Even though all the seating was long gone, the concert hall is pretty much original and untouched from the day it closed in 1911. It’s pretty amazing something like this still exists in Boston.”

When asked about his plans for the building William said he plans on doing some much-needed renovations and updating on the upper six floors and most likely converting it to luxury units with first floor retail, but has no plans for the concert hall, yet.

Thibeault Development has had great success in the past with buying up class B and C office buildings and converting them into luxury rental units along with first floor retail space, all around the city. Thibeault is currently in the final permitting stages of his 601 Newbury St. building to add additional four-stories and convert it to 70 residential units. From the upper stories you will be able to overlook Fenway park and watch the Red Sox play.

Thibeault Development does not just focus on the city, they also have a large portfolio of properties in the surrounding area, N.H. and R.I. In the past he has permitted several large residential projects, on property he owns in the suburbs of the city. Thibeault Development permitted over 250 units in Revere, 700 units in Chelsea, next to the Silver Line and recently completed the permitting of 650 units on his property in Everett and has started the process on another 175-200 units on the adjacent parcel. All the above projects were former contaminated brownfield sites and junkyard facilities. Thibeault purchased the sites and remediated the properties returning them to a viable use.

Another such residential conversion was the old Mass Registry Building on Washington Street which now houses Bank of America and Dunkin Donuts on the first floor and 37 units on the upper floors,

Thibeault Development does not just concentrate on residential but also has a presents in the industrial market. One of the more recent transactions was the purchase of the 157 acre, 1,100,000 sq ft Silver City Galleria Mall in Taunton. This property will be permitted for a large industrial warehouse project, as will the newest purchase of property in Hooksett NH.

The Hooksett property was purchased with added water right to hundreds of thousands of gallons a day. William said “We are permitting the removal of million plus yards of gravel from the site and simultaneously we will be looking for a large industrial warehouse user to occupy the site once the gravel is removed. The water rights were a great addition to the property, and we are actively looking to either partner with someone or sell off the water rights”.

Thibeault Development has two of its largest, high dollar, properties under contract, to sell within the next 3-6 months and is actively looking for projects and buildings to roll the profits into. William said that he will look at anything that has valued added or a great long-term tenant. He is also used to dealing with properties that have issues, contaminated sites, Brownfield properties, or hard to permit sites. He looks at property that other developer might shy away from, due to the issues that come along with them.