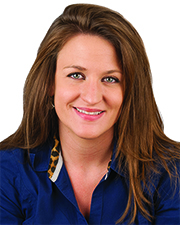 How many years have you been in your current field? 13

Who are three women – living or dead – that you would like to have drinks with and why?
1. Barbara Lynch – Strong, self-made Bostonian who mastered a predominantly male hospitality industry through award-winning establishments. Her restaurants are elegant—despite what I assume would be very relatable obstacles throughout the process.
2. Coco Chanel – Coco was an incredible force in the 1920s, promoting women’s equality through dress, including gender-neutral pantsuits. A woman so influential without saying a word must have a lot to say over a cocktail!
3. My mom – As a fighter for female equality, I would love to get her opinion on the progress women have made in the Western world, and my own small part in the movement.

What was your first job and what did you learn from it? I worked for a masonry contractor in Boston, where I quickly learned how few female voices there are in this trade and how important mastering a clear, deliberate, informed voice is when striving for success. Establishing my voice didn’t happen overnight—especially as a newly-graduated project manager—but once I found it, it was a serious game changer.