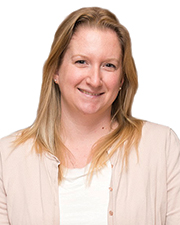 How many years have you been in your current field? 14

What are you doing differently in 2019 that has had a positive impact on your career? I think one of the most important things you can do to maintain a successful career is to keep learning. I have made a big effort over the past few years to learn about a new technology or system on every project. It can be a challenge—it’s easy to stay in the same routine that you know works, but learning about and integrating advancing technology often leads to a higher level of success through communication, coordination, and time management.

What were your biggest fears when you started out in your profession? My biggest fear was being wrong. It kept me from speaking up as I didn’t want to say the wrong thing or ask a dumb question. I’ve since learned that usually if I have a question, someone else does, too. The only way to learn is to participate in conversation. Your input—whether it works or not—will help you learn about the topic, how to approach it, and how you can best problem solve in the future.

Who are three women – living or dead – that you would like to have drinks with and why?
1. Serena Williams – She is simply a force in the athletic world and is a great example of success in overcoming stereotypes and what you “should be”—whether it be gender, race, body type, or parent.
2. Barbara Lynch – She has been a pioneer in the restaurant industry and it has been inspiring to watch a woman succeed and lead the way in a male-dominated industry.
3. Jennifer Lawrence – In addition to being a wonderful actress and a hilarious individual, the work she has done for women’s equality and body positivity is inspiring.

Which project, deal or transaction was the “game changer” in the advancement of your career during the last 10 years? The CinéBistro project in Hampton, Virginia. It was a 65,000-square-foot project that included eight movie theaters, nine bowling lanes, a large bar, and full kitchen. It was the first time I really advocated for myself–I was slated to run a smaller project in the complex, but I approached my manager and sold him on why I was the best person to manage the project. Ultimately, I was given the opportunity to lead the project team, and we took a 25-week schedule and compressed it down to 19, resulting in what the client called the fastest and cleanest turnover in their history.