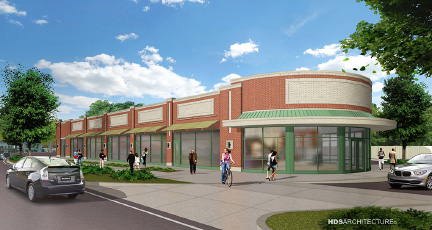 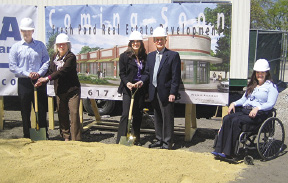 The former Fresh Pond Seafood site, overlooking Fresh Pond, will be transformed into a landmark community retail center by the end of the year. A recent groundbreaking with Cambridge city officials was held at the site at 355 Fresh Pond Parkway.
"We've been trying to bring this site in West Cambridge back to life for a long time," said Cambridge mayor Henrietta Davis. "It's a cornerstone for the future of this area, with pedestrian walkways and a link to the neighborhoods on both sides."
Deputy city manager Richard Rossi said, "This is an exciting project for the city in a section that's been neglected for so long. The developers have withstood the pressures of the economy and stayed with this project, which is going to be first class. It will make the Parkway come back to life."
Sydney Associates, Inc. of Brookline and Spellman Ventures of Natick are developing the new 12,000 s/f brick building, which will have architectural accents and metal and glass storefronts. The $2 million project will replace a dilapidated retail strip, the former Fresh Pond Seafood, which closed in December 2006 and has been an eyesore in West Cambridge. The new building will offer panoramic frontage for retail shops and an inviting experience for pedestrians, commuters and cyclists along Fresh Pond Parkway.
There will be five retail tenants in the new center, including the Vitamin Shoppe and Select Comfort. Negotiations are underway with other local and national retailers. Construction had been delayed due to the economic downturn that began in 2008.
"This building reflects our commitment as developers to creating first class retail projects that are appealing to the community as well as to our retail tenants and their customers," said Roberta Sydney, president of Sydney Associates. "While people still miss the fish store, the community has been very supportive and eager to see the rebirth of this downtrodden site."
She thanked the City of Cambridge, particularly the Department of Community Development, for its support in helping to bring the project to fruition.
"Our goal was to design a building that would become a permanent visual icon along one of metro Boston's major East-West roadways," said Hans Strauch, principal architect, president of HDS Architecture in Cambridge. "The brick and glass building will transform a long underutilized, blighted eyesore into an attractive shopping destination with ample sidewalks, expansive store frontage and abundant landscaping."
Roger Boothe, director of urban design in the Cambridge Community Development Department said, "I was pleased when, some five or six years ago, the Cambridge planning board approved this project to rebuild on the former Fresh Pond Seafood site. The building design is an attractive modern reinvention of a classic small-scale retail building, featuring shops with storefront windows and entries all around the structure, complemented by landscaping and walkways that will help this currently unappealing site tie into the surrounding neighborhood.
"As a resident who lives a couple of blocks away, I know how eager my neighbors are to see this kind of improvement, because they ask me about it all the time! This will be a welcome new addition to West Cambridge."
Serving Massachusetts for more than 40 years, Sydney Associates, Inc. is one of the oldest family-owned and operated real estate development and management companies in the Commonwealth.
Tags:
Previous StoryNext Story
Print
PDF