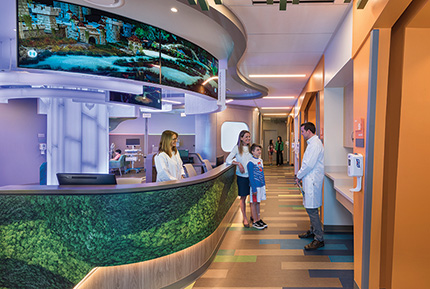 Farmington, CT Connecticut Children’s Medical Center opened their new Infusion Center. Connecticut Children’s partnered with their clinical staff, the families and patients, Tecton Architects and C.E. Floyd Co. Throughout design and construction, the project team kept the focus on the children who would be using the space. From their very first meeting together, it was clear this project was about way more than the individual team members. This project was a success because all team members, subcontractors included, put their egos aside and had a sincere interest to see the project succeed.

Karri May, interim director of facilities at Connecticut Children’s, commented, “The entire team we worked with was collaborative and innovative from day one, helping us resolve unique challenges whenever needed and keeping us informed and on schedule every step of the way.”

The Infusion Center was imagined with a lofty goal: create a world class clinical destination for the patients of Connecticut Children’s to receive intravenous treatment for a variety of acute and chronic illnesses, while emphasizing the person instead of the illness. By all standards, the project team not only met but far exceeded this goal.

C.E. Floyd’s director of Connecticut operations Jeff Palmer said, “We were honored to be a part of a project that set a new standard for the Connecticut Children’s brand and also exemplified true collaboration between owner, designer and contractor to reach a very challenging and groundbreaking goal. We found true partners with Connecticut Children’s and Tecton.”