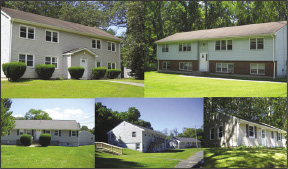 Rick Chozick and Tom Boyle of the Hartford office of Chozick Realty, Inc. have completed the sale of five student apartment complexes surrounding the University of Connecticut. This residential portfolio consists of 359 units with a mix of 160 one-bedroom and 199 two-bedroom apartments.
On the heels of the completion of this transaction, Chozick Rlty. has recently brought an additional 172 units to market in two apartment complexes at UCONN. This newly offered portfolio consists of 96 units at Orchard Acres Apartments located directly adjacent to campus and 76 units at Renwood Apartments on Rte. 195 south of campus. These properties are being offered with a bid deadline of November 29.
UCONN is the number one rated public University in New England and is among the top 20 in the nation. Over the past decade $1.5 billion has been invested in the State's public University system with a substantial portion dedicated to the Storrs campus. Over the past decade virtually every building on campus has been newly constructed or substantially renovated. Governor Dannel Malloy recently signed legislation approving the creation of a technology park on the Storrs campus with the initial construction calling for 125,000 s/f of flexible-use laboratories containing specialized equipment not readily available to industry for collaborative industry-university research. When fully completed, there may be as much as 1 million s/f of high tech industrial and research space completed on north campus, bringing further housing pressure to the area, according to Rick Chozick.
Chozick Rlty. marketed the 231-unit student portfolio utilizing a national marketing platform. Interest in this offering was generated from across the country, demonstrating the strength of the UCONN market. Chozick Rlty. represented the seller, RRE VIP Mansfield LLC as well as procuring the buyer.
Tags:
Previous StoryNext Story
Print
PDF